Praise for our One to Ones:

After winning a competition, the prize was for a 20 minute video call with a professional photographer. This turned into a half hour video chat with Christina and it was brilliant. A lot of what I know is from you tube but found this face to face way more informative. None of my extremely amateur questions were a problem and I didn’t feel in the least bit intimidated. After the call was over I switched to Manual setting and have been experimenting more with it. Fantastic opportunity I had and would recommend Christina to anyone

Keep up with all things Bart!

Keep up to date with the latest with our e-newsletter, including:

Most subjects have their own language and photography is no exception - but let's be honest, it could be a heck of a lot worse. You won't get a photographer saying "the energy released by nuclear fission or fusion is equivalent to the mass loss multiplied by the speed of light squared" - (think Einstein). We're not that bad.

We want to put you 7 steps ahead of the rest so here's 7 phrases you may hear in photography, and some brief explanations. Now, you may think the purpose of this post is just to de-mystify some jargon for you... Actually these bits of jargon have been carefully selected so that if you understand them you'll have a huge insight into how photography actually works. How's that for 2 for the price of one?

An exposure is the total amount of light which reaches the camera's sensor while you are taking a photograph. You can adjust this amount of light by leaving the camera's shutter open for longer or shorter times (shutter speed)  giving a "long exposure", or a "short exposure", or by adjusting the size of the hole through which the light enters the camera (the aperture). In addition you can adjust the sensitivity to light of the camera's sensor so that more or less light is needed for a correct exposure (see ISO below).

Your camera's "metering system" will look at the amount of light present in the frame of your shot and determine what various settings are going to need to be to create a "correct exposure".

(You can change one setting for artistic effect and your camera will work out what other settings need to be to compensate for your change).

Different conditions and sources of light create different colors of light. We refer to this as the "color temperature", which we measure in degrees kelvin. Temperatures of around 2,200K-4,000K give orange/yellow - "warm" colors. Temperatures of 4,200K have a bluey hue - the "cooler" colors. See the chart below.

Candle light or tungsten light is lower on the kelvin scale, as is sunrise and sunset - which is why we see them as orange/yellow (they can appear even more so through the camera lens). Strong daylight / daylight metal halide lighting on the other hand can appear slightly blue - a much "cooler" light (again a camera can sometimes exaggerate this).

This theory is great but what does it mean in practice? It's actually quite important. Our brain can adjust the pictures we see with our eyes so that they "look right", but your camera cannot do so in the same way. For that reason your camera will have a "white balance control", where you can tell it what kind of light you are shooting in, or the temperature of that light. Your camera will then know how to adjust the colors in your photograph to "look right". You can also flick that switch onto "auto" and your camera will do it's best....

The thing is about white balance is the camera doesn't always get it right, unless you measure the exact temperature of the light using "grey card" in the exact light you are going to shoot in. That's quite a nerdy thing to do, and is quite time consuming. Even if your camera does get it right - a "warmer" picture may look more pleasing. It is for that reason that I usually shoot on "auto" and change my white balance in editing. My bad.

The graphic below shows the different effects white balance can produce.

Get tips and tricks, enter our monthly competition, have fun, and meet like minded people. All from the safety of our private Facebook Group.

ISO stands for International Standards Organisation. It is the standard by which old photographic film used to be measured.

For example, if you bought an ISO 100 film it would not be that sensitive to light. It would be called a "slow film", because it would need more light to get the correct exposure, so you're looking at slower shutter speeds to let in more light. An ISO 400 film would be 4 times more sensitive to light than the ISO 100 film, you could use a 4 times faster shutter speed (assuming the other settings remained the same) as the ISO 100 film.

We've moved on a bit since then, using digital sensors instead of physical film, and that is a great thing. ISO now measures the sensitivity to light of the camera's digital sensor, using the same ISO scale. You can adjust the sensitivity of the camera's sensor - it's ISO - at any time (you don't have to finish a whole roll of film and then change it - we're lucky to be in the digital age). Basically by setting the sensitivity of the sensor, you can shoot in pretty much any light conditions you want. If it's bright you could for example use ISO 100, if the light is low you could move up to say ISO 800.

Shutter speed is the amount of time the camera's shutter remains open to take your shot. A fast shutter speed will freeze action - like a lot flying dog in mid air. A slow shutter speed can be used to create motion blur - see the photographs below.

Aperture is the size of the hole through which light enters the camera. The bigger the hole, the more light is let in at any one time. If you use a large aperture like f2.8 or f1.4 (if your lens allows for that), you are pretty much shooting "wide open" - see the aperture to the left of the graphic below. Such apertures will give you a blurred background - what we call the "bokeh effect".

Conversely if you use a small aperture like f22 - see towards the right of the graphic above, everything in your shot will be in focus.

Much "digital noise" is visible on this picture when zoomed in like this. This can easily happen if you are shooting on a high ISO.

Digital noise is the "grainy effect" you can get on photos - see the inlay shot. It is similar to film grain. This kind of "noise" is not audible, it is caused by unwanted signals reaching the camera's sensor creating random pixels. Digital noise tends to be more prevalent when you are shooting in low light situations or where your camera's sensor is set to a high sensitivity (a high ISO number).

Why not find some of the above mentioned settings on your camera and literally have a "play" with them. See what different effects you can get?

You can find more information in our free Guide - see below.

Did you find this post useful, or do you have any questions? Why not comment in the section below? 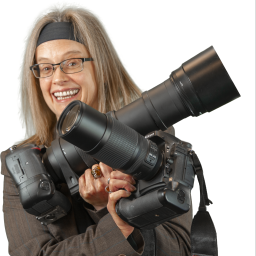 Christina's passions are photography and creating. She has had photographs published in national and international publications. Christina is dedicated to sharing her passion for photography in fun and interesting ways, so that others can enjoy their own creative abundance. The joy of photography is open to everyone.

The Memories That Never Fade

The Memories That Never Fade

Please get in touch if you have any questions, any suggestions of things you would like us to cover in this blog, or anything else you'd like to say. We'd love to hear from you!

Please log in again. The login page will open in a new tab. After logging in you can close it and return to this page.

We use cookies on our website to give you the most relevant experience by remembering your preferences and repeat visits. By clicking “Accept All”, you consent to the use of ALL the cookies. However, you may visit "Cookie Settings" to provide a controlled consent.
Cookie SettingsAccept All
Manage consent

This website uses cookies to improve your experience while you navigate through the website. Out of these, the cookies that are categorized as necessary are stored on your browser as they are essential for the working of basic functionalities of the website. We also use third-party cookies that help us analyze and understand how you use this website. These cookies will be stored in your browser only with your consent. You also have the option to opt-out of these cookies. But opting out of some of these cookies may affect your browsing experience.
Necessary Always Enabled
Necessary cookies are absolutely essential for the website to function properly. These cookies ensure basic functionalities and security features of the website, anonymously.
Functional
Functional cookies help to perform certain functionalities like sharing the content of the website on social media platforms, collect feedbacks, and other third-party features.
Performance
Performance cookies are used to understand and analyze the key performance indexes of the website which helps in delivering a better user experience for the visitors.
Analytics
Analytical cookies are used to understand how visitors interact with the website. These cookies help provide information on metrics the number of visitors, bounce rate, traffic source, etc.
Advertisement
Advertisement cookies are used to provide visitors with relevant ads and marketing campaigns. These cookies track visitors across websites and collect information to provide customized ads.
Others
Other uncategorized cookies are those that are being analyzed and have not been classified into a category as yet.
SAVE & ACCEPT